There have been some changes of staff this year with Nick Ward leaving at the end of September, and Katrina Dick taking over late Aug to ensure a good handover.

The Initiative is currently working on some really exiting projects both old and new. Below is a summary on the projects.

See foot of the page for link to Accounts Information

Phase two of the Douglas Park project was moving on well until March 2020 with a potential build date for the play park set when the initiative was forced to scale down its business activities.

Once we started easing out of lockdown the project was restarted with even greater ambitions as it was decided to merge Phase two and Phase three of the Douglas Park project to ensure a greater chance of obtaining funding from external funders.

Phase three was planned for later once the play park had been completed and consisted of installing a Changing Places toilet plus a unisex toilet as well as tarmacking the car park to make it more wheelchair accessible. This will not be done together.

We are now at a phase where we have a hopeful time of commencement for late Aug for the Changing Places toilet, what remains is getting external funding from various organisation to match the funding already ring fenced for the project by Dumfries & Galloway Council.

Due to a change of Project workers and lockdown restrictions the Penninghame Centre project was put on hold to focus the limited time on more pressing matters.

After discussions, scoping and research carried out, the Initiative are now looking to try and move on with the intention of taking over the Penninghame Centre from Dumfries & Galloway Council to use as a Community Centre for the whole of Newton Stewart and beyond.

The Initiative have kindly been offered a grant from the Kilgallioch Wider Fund to be able to get help with creating a business plan which will be essential for moving on to the second stage of the Community Asset Transfer.

Upon scoping it has become apparent that some Council owned Industrial Buildings in Minnigaff were also on the list of Council assets available through the Community Asset Transfer scheme.

As it is important to the Initiative to be able to run the Penninghame Centre on an independent basis it made sense to also take over the industrial units which will provide a steady income for the Initiative through renting them out to local businesses.

We are currently at a stage where we are hoping to commence on two business plans which although separate to highlight their different qualities and strengths will incorporate the two Assets binding function in a bid to enable the Initiative to carry out the work of regenerating the community through spending funds obtained by renting out the Minnigaff Industrial Units on a much needed Community Centre which will provide a meeting point and group space for anyone in the community.

The centre was keeping itself running well before having to close due to the first lockdown in March.

The centre remained closed until middle of September when we were approached by a local dance group looking for somewhere to dance twice a week. We have also had the centre open to some other groups.

Contamination prevention was a main concern and aim for the NSI once the centre reopened which resulted in it being open to only one group per day and with extra cleaning put in on days after groups had used the centre.

We also applied for some grant funding for the extra cleaning costs, which enabled us to keep the costs for people using the centre down.

The Centre has since January been closed due to another lockdown. We are keeping our eyes on the restriction guidance to enable us to open up once it is considered safe to do so.

Good publicity is important for any organisation. It became apparent to the Initiative that the NSI website needed a revamp to ensure it showcased what the NSI has done, is doing and is going to do.

The idea of consecutively revamping the defunct ‘official’ Newton Stewart page came up in discussion too. Funding has since been granted by the Scotland Loves Local Fund to carry out this work which will provide an official website for the town of Newton Stewart.

The work on the websites is currently ongoing. This grant also covers costs for business cards for the initiative and the ‘official’ Newton Stewart site. The Initiative have also got several Facebook pages open for the centre, the organisation itself as well as fundraising and project based pages. We are lucky to have a keen volunteer who helps us with this.

The Initiative were given grant funding from the Holywood Trust in relation to starting up a youth club at the Newton Stewart Centre which was going quite well. Unfortunately the youth club had to be discontinued in March when the pandemic hit, when restrictions started to lift it became apparent that it was not viable to continue with the youth work in its present form inside due to the need for adequate spacing and ventilation.

After discussions with the Holywood Trust and D&G Youth Team it became apparent that any future youth work should be held outside as much as possible.

The idea of doing an outdoors practical/environmental group was discussed and consequently funding was granted from the Holywood Trust for three months of doing outdoor work with young people in partnership with D & G Council youth team.

The project was due to start at the start of March 2021, although due to the current restrictions it is possible that this could be postponed.

The NSI Charity shop was thriving before the pandemic hit with a good intake of goods to sell and a good customer base, as well as very dedicated and skilled volunteers.

The shop had to close during the first lockdown in March although opened up in September on a restricted timetable once it was felt it was safe to do so. The Charity shop managed to give out grants to the community, which is part of the remit this year too. In November ten local organisations, individuals & groups were given grants for their projects which ranged from carrying out habitat work, to providing opportunities to young people, to providing equipment to enable disadvantaged people.

The Charity shop has been closed since the start of January but once restrictions ease we are aiming to be back in the shop. 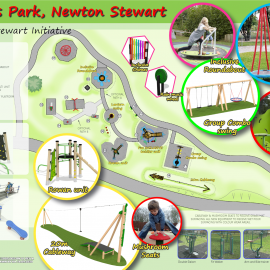